3 Reasons Tough Love is Better Than a Culture of Nice

I do a LOT of listening in my job. Every day I have the pleasure of interacting with leaders from all around the globe.

What has piqued my curiosity, as of late, is a word that I am hearing more and more often in my conversations with leaders when they are describing the current state of their organizational culture.

That word is “nice.”

Specifically, I am hearing things such as, “I think my business is too nice,” and “Everyone is always pleasant to each other, yet something doesn’t feel right. There is a lot of tension in the air.”

All of this talk about being nice has me thinking, could being nice actually be doing more harm than good?

To really understand this concept of nice, we need to travel back in time…

If you have siblings, you are probably familiar with the phrase, “Be nice to your brother/sister!” If you were an only child, perhaps you heard, “Play nice with the other kids.” Being nice to others was a common childhood lesson, right?

I have a memory from when I was about 10 or 11 years old. I was very angry with my sister for not returning my favorite mixtape (Ahh, the 80’s).

I lent it to her in an effort to be nice, to be sisterly, but she was not willing to give it back, no matter how many times I “nicely” asked. Instead of confronting her (because I knew it would escalate into a screaming match and we would both get into trouble) I went to my mom.

I told her what happened, hoping she could help me get my tape back, and her response was “Beth, can’t you just be nice to your sister? Let it go and listen to one of your other tapes for a while.”

I vividly remember how frustrated I was. Let it go? it was MY music! I didn’t WANT to “let it go.” I wanted what was rightly mine! However, despite my frustration, I obeyed my mother and I “played nice” — I let my sister have the tape.

Underneath that thin veil of nice, anger and resentment were brewing.

Being nice did not feel so nice and it certainly didn’t get me any closer to getting my tape back.

As I reflect on that memory, three little words, keep nagging at me — just “let it go.” In other words, don’t let it bother you. But what if it really DOES bother you? What then?

Sometimes, the act of playing nice can lead to masking our authentic selves. We hide our real needs or feelings, we avoid the real issue, and nothing gets resolved.  Worse, we wind up in a state of deep resentment, feeling done to and powerless.

As I look at the business landscape today, and the many conversations I’ve had with leaders, it seems our childhood teachings have translated to our adult beliefs — being “nice” is encouraged, and we are consistently reminded how it will benefit us, and our team, in the long run.

Russ Edelman, the author of Nice Guys Can Get the Corner Office, says, “being too nice hampers your career growth and costs your business time and money.”

In a survey of 50 CEOs, Edelman asked about the impact of “being too nice” on their businesses. The CEOs responded that being too nice cost them 8 percent of their gross revenues — 8 percent!

Edelman goes on to say that managers who are too nice have a hard time making decisions on their own.

They don’t want to offend others by not asking for their input or feedback, so they include everyone in their decision-making which leads to wasted time and even missed opportunities.

Managers who are too nice also ignore problems rather than facing them directly. They worry about hurting other people’s feelings, so they avoid the conversations that are critical to success.

Effective leaders know this too, so they invite the real, open, honest conversations that are necessary to turn their culture of “nice” into a culture of results.

Instead of being preoccupied with coming off nice, these leaders will commit to authentic, sometimes raw conversations to get successful results.

Personally speaking, the leaders I have the most respect for are those who were able to reveal my blind spots to me. I can remember a time in my career when I was poised to move into a new role. I wanted this role so badly I could taste it. I felt I had done everything right to be the perfect candidate for this position and it was clearly mine to lose.

Well, I lost it. When it came time to announce the position, it didn’t go to me, it went to a peer of mine, And I was absolutely shocked. Truly. When I asked the hiring manager why I wasn’t chosen, her response was very interesting.

It wasn’t easy to hear, but it was an insight I didn’t have. She told me that I lacked a leadership “voice,” Which specifically for me, was the ability to speak up and share my opinions in meetings and with peers, even when it wasn’t the popular thing to say.

She told me I was afraid to ask the tough questions — she was right!

That was a hard pill to swallow and I admit, I was a little resentful at first. But what I realized over time, is that this manager gave me a gift. By telling me what I needed to hear, she allowed me the opportunity to grow and improve myself.  For that, I am eternally grateful.

When leaders stop worrying about being nice and start mastering the courage to give difficult feedback or confront behavior, real growth occurs, and trust is built.

Ask yourself, how am I showing up? Am I masking my true thoughts and feelings so others will see me as likable, easy to work with, non-confrontational? If so, what is that costing me, my team, our results?

WHAT YOU CAN DO

If you find yourself sliding down the slippery slope of “nice,” here are three behaviors that I have seen successful leaders leverage to get back on track and start getting real with themselves and others:

1. Replace the word “nice” with “in service”

Nice is saying what you think the person wants to hear. Being “in service” is saying what you know the person needs to hear in order to improve and get better. There is something within each of us that responds to those who level with us, who don’t suggest our compromises for us.  Be that person for your team.

Engaging in productive conflict, while difficult, makes for better performance overall, both for the individual and for the organization because you are getting to the root of problems and working from the ground up to solve them together.

Ask yourself “what can I do to be in-service of this person, this team, this client?”

2. Stop procrastinating and have the conversation

If you are an 11th-hour junkie, especially when it comes to having those sticky uncomfortable conversations, a small bit of advice: Stop it.

As George Eliot once said, “Falsehood is easy.  The truth is difficult.”

Acknowledge that some conversations are simply NOT easy, regardless of how hard you try to make them so.  Nice people tend to avoid the conversations that make them uncomfortable such as giving critical feedback or confronting someone’s behavior.

Of course, there are legitimate reasons to be scared about having some conversations.

Let’s be honest, some people do not react well when confronted, regardless of how eloquent and thoughtful you are. This is the reality.

However, what is also reality is that the cost of not having the conversation is much greater than the risk of it going badly. The value of the hard conversation is that it helps us solve problems.

As the saying goes, you get what you tolerate. When we play it nice and avoid the conversations that really need to take place, our results (and the results of our team members) continue to suffer.

Many times, when we have a difficult message to deliver, we write the script. In other words, we prepare exactly what we are going to say and what the other person will likely say in response to our words, in an effort to “help” the conversation be successful.  Trouble is, the conversation never sticks to the script.

As human beings, we are often lured into false truths based on how we think we “see it.” This can lead us to act on our assumptions and enter the conversation with what I like to call a “dump and run” mentality — how can I share my thoughts as swiftly as possible, get them to “see things my way”, and then get out before they have time to argue?

If this sounds familiar to you, here is a tip:  commit to asking three questions during the conversation. Invite the two-way dialogue by getting curious and asking more questions. Work to see the situation through the other person’s eyes.

It doesn’t mean you have to change your perspective but be willing to explore. Share your own opinion and challenge yourself to explore the other person’s reality.

A culture of results does not mean you need to “fight” for your perspective to be heard. Just like being too nice has its consequences, being too bull-headed or unyielding in your beliefs can do an equal amount of harm.

Seek to understand the other person while exploring the issue or topic at hand. It’s not an either/or. It is a both/and.

So how are you showing up? Are you modeling the behavior you wish to see from others or are you sliding down the slippery slope of niceness?

When we stop “letting things go” and start having the real, open, transparent conversations, we begin to build a shared culture that increases engagement and enables us to achieve the results we want.

Want to stop being nice and start having open, authentic conversations but don’t know where to begin? Download our free eBook, 5 Conversations You Need to Start Having Today, to learn how YOU can start changing your workplace culture for the better. 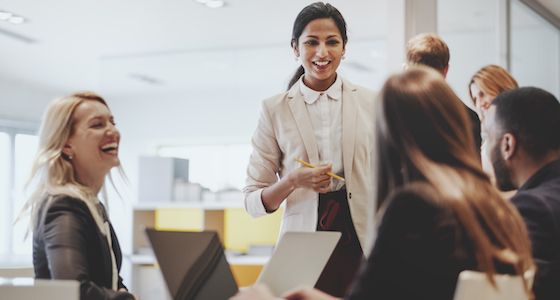